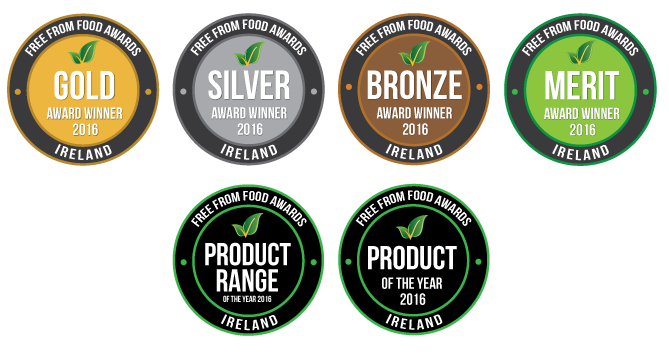 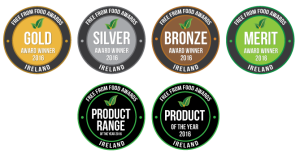 The winners of the only awards dedicated to freefrom products in Ireland were announced at a Gala Presentation ceremony in the Crowne Plaza Hotel, Northwood, on Thursday 11th May. This year sees the Awards expand to 44 categories, with 101 brands and a total of 583 products judged over 14
days. This demonstrates the continued growth of the freefrom sector, with manufacturers responding to demand, be it gluten free, dairy free, wheat free or any of the 14 allergens which limit consumer’s diets.

Whether food be medicine or lifestyle choice, the growth is driving the freefrom industry, and figures suggest that freefrom is not a fad, but here to stay. Bord Bia cite that the Irish gluten free market is worth €66 million, a 36% increase on last year. This is an extremely positive outcome for consumers who are coeliac or who have a diagnosed intolerance or allergy, needing certain foods to be available to them. The FreeFrom Food Awards looks for excellence and innovation in this industry, so that the bar is constantly raised in terms of quality, availability and affordability in freefrom foods.

The FreeFrom Food Awards took place in Ireland in 2016 for the first time and were hugely successful, with many brands benefiting from the opportunity to herald their products as award winning. Product of the Year winner, Rule of Crumb were listed in over 450 Sainsbury’s stores with their Gluten Free
Profiterole.

Having originated in the UK, the Irish awards were founded by coeliac businessman, John Burke. “We are amazed at the excellence of the products that have come this year. The Awards were established to promote quality, to seek out diversity, to encourage manufacturers to bring new products to the market place. The freefrom market is advancing and we’re keen to see this continuing in the future,” says Burke. “As a coeliac of 44 years, I am thrilled to witness these changes – we’ve come a long way since unpalatable bread and plain dinners – it’s very satisfying to see the market evolve and to acknowledge those contributing to it.”

Gold, Silver and Bronze are granted, along with a Merit badge for products still considered high quality by the judges. Winners may display the relevant badge on their packaging, which helps consumers wading through the extensive freefrom sections of stores to discern which products are best. Categories are diverse from pasta to ready meals, cakes to crisps and bread products to breakfast cereals.

‘It was a great boost that our gluten-free profiteroles won the product of the year award in 2016. Since winning the awards we have received great interest from consumers and buyers. Having a winning product really helps to break into these areas,” says Colum McLornan, Director, Rule of Crumb.

Winners were announced during a 5 course gluten-free meal at the Crowne Plaza Hotel. Also presented are the coveted Product of the Year, Range of the Year, Innovation, and the special Services to the Industry Award, sponsored by Juvela, which recognises contribution by individuals to the arena.

Freefrom Food Awards Ireland has been established independently by John Burke, founder of GFLife. The FreeFrom Food Awards, were started in the UK in 2007, being the only industry awards for FreeFrom foods, by FoodsMatter and FreeFrom Foods Matter. Having been a judge at the UK FreeFrom Awards for over 7 years, John adapted the awards format for an Irish setting.

Click here for the full list of winners and photos from the night. Also check out our Facebook page for a live video from the evening!