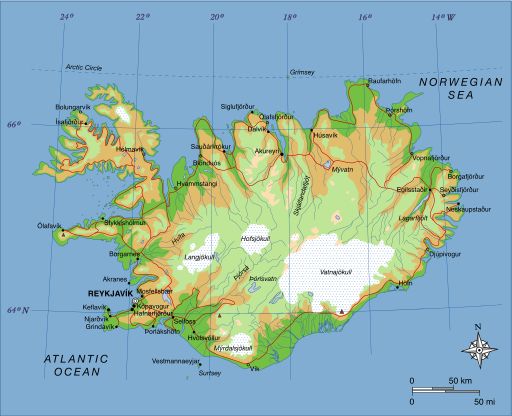 By Max Naylor [Public domain], via Wikimedia Commons
Iceland – the land of Fire and Ice is an exciting country which Tina and I got the opportunity to visit recently on a short break holiday (November 2017) and we can thoroughly recommend it as a tourist destination – even if you are Coeliac!

It’s a relatively short flight (2.5 Hours) from Belfast International Airport to Keflavik Airport which is about 48 Km (30 miles) from the Icelandic Capital, Reykjavik but we didn’t need to worry about hotel transfers as we had arrived as part of a Tour organised through the Belfast Telegraph Travel Department.

We arrived in Iceland around 6.30 pm on the Monday, spent the following three days touring Reykjavik, experiencing the Golden Circle tour and exploring South Iceland before catching an early flight home to Belfast on the Friday morning.

This was a short stay and means we can only report on what we found while taking part in the tours but we reckon it will give you a fairly accurate picture of Gluten Free travel in Iceland in 2017.

Before talking about the Gluten Free scene let me give you some general positives and negatives about Iceland (in our humble opinion!).
Positives

The term “Gluten Free” was understood everywhere we enquired but it has not yet become as mainstream as it has in the rest of Europe.
Some staff had more knowledge than others.

GF Options were very limited in cafes, restaurants and in our Hotel (The Grand).

Cross contamination is a potential problem as not every establishment recognised it as a threat so if you are very gluten sensitive you need to ask plenty of questions or carry food with you.

There was a shortage of GF bread everywhere we visited.

Wrapped products usually had the ingredients listed in several languages (including English) as in the rest of Europe.

In some places ordinary Oats were thought to be GF so be careful.

Supermarkets like Krónan stocked some GF products such as Rice Cakes, Nakd Bars and GF Flour but very little of use for a snack on a bus tour. Fortunately any café we stopped at had GF Lamb or Turnip Soup on the menu but again – no GF bread!

Other supermarkets to try in Reykjavik are Bónus, Nettó and Hagkaup.

Locations on Our Trip with Gluten Free Food

The Pearl is a very interesting building but here again their café had no GF options and a Latte coffee was £5 a cup!

We visited the Whales of Iceland exhibition which had no GF options in their café.

Old Iceland Restaurant in Reykjavik
Nothing marked as GF on the Menu but the Waiting staff (Turkish & Spanish) were able to provide Tina with a GF meal after consulting the Chef. Lovely meal but the Crème Brulee dessert came as GF but partly coated with toasted Oats. The Spanish Waiter didn’t know that Oats can be a problem for Coeliacs.

Gullfoss
We only had time to go and see part of the Gullfoss Waterfall before boarding our Tour bus again so we have no information about the menu. However, here’s a link to the Café –
http://gullfoss.is/cafe/

Geysir
At Geysir we had time for lunch and found Lamb Soup in the Kantina Café which the Chef confirmed was GF but again, no GF bread.
The other Café in the Geysir complex – Supa – had Brownies and a Dime Bar cake but the Dime Bar cake was sitting uncovered on the bottom shelf of the display cabinet leaving it open to cross contamination from crumbs falling from the top shelf.
www.icelandtravel.is/about-iceland/destination-guide/geysir-center/

Black Beach
At the Black Beach Café I had the Lamb Soup and Tina tried the Turnip Soup which was confirmed as GF but again, no GF bread!
www.svartafjaran.com/matseethillmenu.html

Supermarkets in Reykjavik – Krónan
We spent a short time in one branch of Krónan in Reykjavik where they sold GF Flour, Rice Cakes, Potato Crisps and some Schar products but nothing of great use to someone looking for a snack on a tour bus.
https://kronan.is/