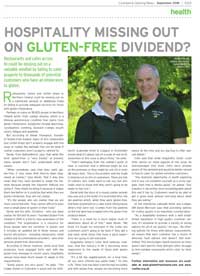 Safefood (based in Cork) is an umbrella organisation covering the Food Standards Agency in Northern Ireland and the Food Safety Authority of Ireland based in Dublin.

In January Safefood organised a series of talks about Allergens and Intolerances to Catering Students in Colleges across Northern Ireland. The talks were given by a food expert from Safefood, an Allergen expert from the Food Standards Agency and my wife and I were invited to speak about Coeliac Disease and its effect on everyday life.

We spoke in the Colleges in Londonderry, Limavady, Ballymena, Belfast, Bangor, Downpatrick, Portadown and Dungannon and should have gone to Newry but that was cancelled by the heavy snowfalls in January. (The Newry talk was reorganised and held in August.)

The talks were all well received but revealed a serious lack of training in Allergens generally as there was very little about Allergens on the college curriculum and a real lack of knowledge regarding Coeliac Disease, gluten free food and its effect on people for whom Gluten is a medical problem.

(As a result of our talks we discovered at our subsequent Newry talk in August that Allergens will be added to the college curriculum in September 2019. This is of particular importance in light of the very unfortunate Allergy related deaths we have read about during 2018.)

In March we supported a very useful Coeliac event held by the Southern Health Board at Brownlow in Lurgan to help young Coeliac patients.

In September we were invited to speak at the Food & Drink Expo in the CityWest Hotel in Dublin and we also got the opportunity to speak about Coeliac Disease on the Sean O’Rourke program on RTE Radio.

However, the comment in the article from Colin Neill on behalf of Hospitality Ulster was disappointing in that, while things have improved somewhat over the past few years, anyone looking for a safe Gluten Free meal in local food outlets can still face many problems!

It has been said that the first step to solving a problem is to recognise there is one and, going by the many comments we see on our social media links, some folks in the catering industry still have a real problem catering safely for their Coeliac customers.

October was a very busy month as we held our annual Gluten Free Food Fair in the Stormont Hotel, Belfast to give Gluten Free producers an opportunity to show and promote their products to the local Gluten Free community. The event was sponsored by Juvela and supported by a wide range of traders from both Northern and Southern Ireland. Juvela

Later in the month we spent a full day running a number of workshops about Coeliac Disease and Gluten Free food to a number of food traders and their staff in Donaghadee, Co Down. (The day was very useful and organised by the Donaghadee Community Development Association.)

Thank you for all your comments, advice and suggestions on our website and Social Media links during 2018.  Please continue to interact with us during 2019 as we know that all the information we provide or share proves useful to someone struggling to cope with Coeliac Disease.

(Please note, someone has started a Facebook page and called it “Gluten Free in Ireland”. Our Facebook page is Facebook.com/glutenfreeireland (no “in”) and we have nothing to do with the other page.)

Happy New Year to all.

Derek, Tina, Mike and the team at Gluten Free Ireland.